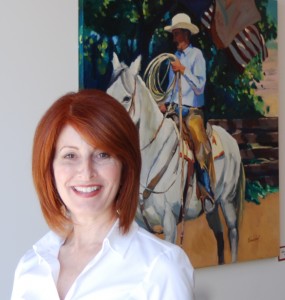 At 35 years old, a transformative moment in Janet Vanderhoof’s life occurred during the birth of her son.  Blake was born with Down Syndrome.  As in the Hero’s Journey, Janet was being called.  Her life altered dramatically and set the stage for a new way of thinking.  Janet discovered her job in the wholesale lumber industry was not fulfilling her.  She decides in the words of Joseph Campbell, to “Follow Her Bliss” and pursues her tucked away dream of becoming an artist.  Janet’s education consisted of a Bachelor of Arts, workshops, private classes, and art courses at her local college.  The exceptional teachers she has been fortunate to study under were George de Groat, Charles Movalli, Charles Sovek, Camille Przewodek, Melinda Cootsona, Karen Kaapcke and Martin Campos.  Her wide range of training has permitted her to express herself with unlimited ability.

Janet Vanderhoof’s first love is color; which is the emotional force behind her paintings.  Her art is dramatic, intentionally focusing on expressing the light from within, as well as capturing an emotive moment and strength of spirit.  Janet is primarily an oil and acrylic painter and recently added Cold Wax to her mediums.  Lately, she has been adding additional texture to her paintings with the use of pallet knife, stencils, blades, oil pastel, oil bar, Charcoal and graphite.  She has been told her light infused work resonates joy and hope; as well as connects the viewer to their hidden emotions.

Janet Vanderhoof is a published artist with Grand Image in Seattle, Washington, who provides Print On Demand and prints of 40 of her images.  She has been in numerous local galleries.  Her last stint was Colibri Art and Frame in Morgan Hill, CA.

Her Military father during WWII fell in love at first site with her French mother as she came out the Opera Metro, in Paris. This fateful moment allowed Janet to be born in 1951 at Rhein-Main Air Base in Frankfurt, Germany.  She grew up mostly in Silicon Valley experiencing the growth from walnut groves to high tech. Happily married for over 40 years, she lives with her husband and one of her three sons Blake, in Morgan Hill California, surrounding herself with nature and her inspiration for her landscape paintings.

If you are interested in purchasing any of my art or have questions,please contact me or call (408)460-7237. Thank you!